The way to get to Tent City is different for everyone, but there are overlaps- a shared lineage. Sometimes abrupt, others slow and painful, perhaps a drowning, a domino effect, or a tragic fall. They come in singles and pairs, clutching salvaged heirlooms and quickly stuffed plastic bags, in search of warmth, safety and bit of stillness.

A few yards from a nondescript road in suburban New Jersey, a two hour drive south of New York City, about 100 people live in a community of tents and shacks in a forest owned by the city of Lakewood. The camp, built over the last 7 years by its unofficial leader Minister Steven Brigham, and its revolving list of occupants, is home to the chronically homeless and the newly impoverished alike. Many victims of the 2008 economic crisis ended up there, after the rent money ran out, and staying with relatives grew tense, and they found themselves with no where else to go.

There are no homeless shelters in Lakewood, New Jersey, nor in the surrounding Ocean County, but in the summer of 2010, the City of Lakewood filed a lawsuit to forcibly evict the residents of the camp. A legal battle has ensued, as a pro-bono attorney for the camp has come forward demanding that every person should have a basic right to shelter themselves on public land in the absence of an alternative.

In a political climate in which words like entitlements, class, boot straps, and balance fly between those in power until they lose their meaning, lives hang in the balance.   Each Tent City resident’s story is that of the intricate unraveling of a safety net, and what happens after. 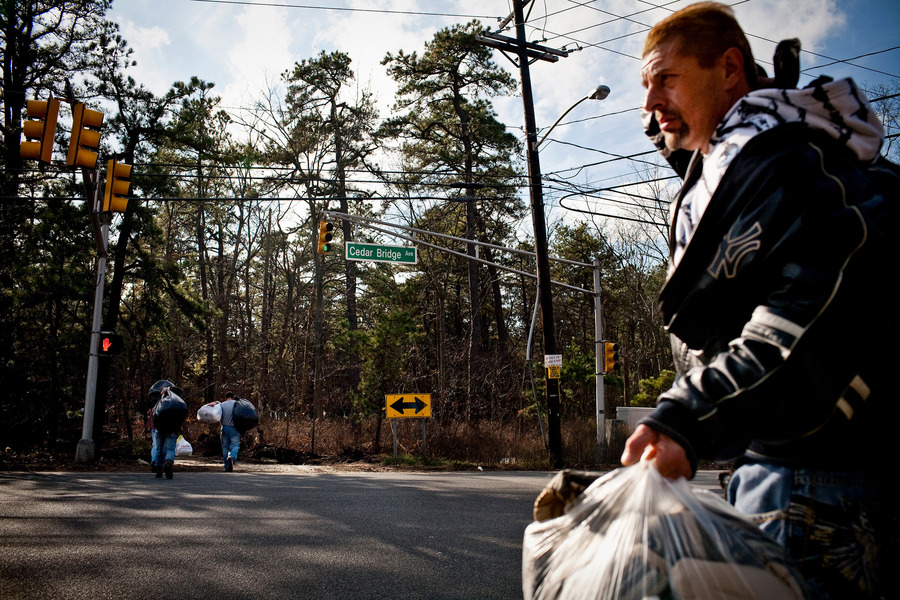 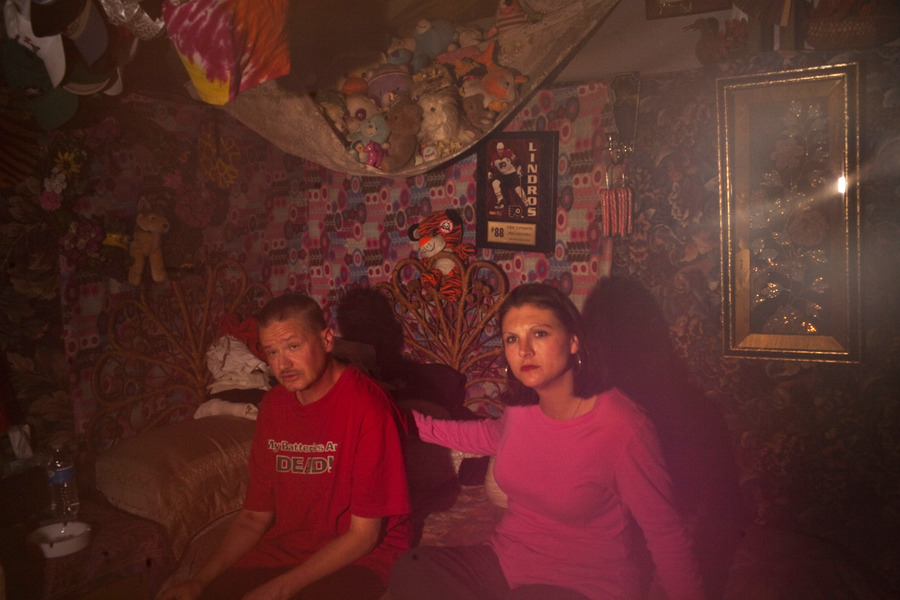 May 3rd, 2012. Lakewood, New Jersey. Cynthia and Elwood sit on their bed in their tent, which Elwood has meticulously decorated with stuffed animals, tapestries, ornaments and other objects. "What I really need," says Cynthia about her 2 year stint in the camp, "is a vacuum cleaner and a job. If I get a job I can save some money and get him and me the hell out of here, if I get a vacuum i can keep my floor clean while I'm doing it." (Natalie Keyssar) 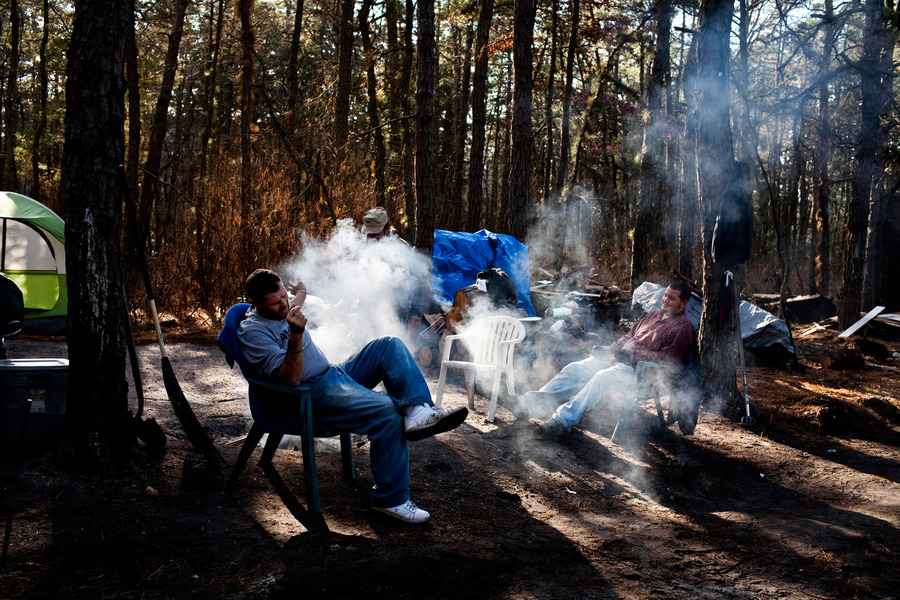 Friday, December 9th, 2011. Charles "Country" Bauers, left, and his son, Charles Bauers Jr. , warm themselves by a fire in tent city, soon after their arrival in the camp. Charles Jr. worked at a Mcdonalds at the time, while his father looked for work in construction. They stayed for a few months, before moving on. Rumors conflicted about where they went. (Natalie Keyssar) 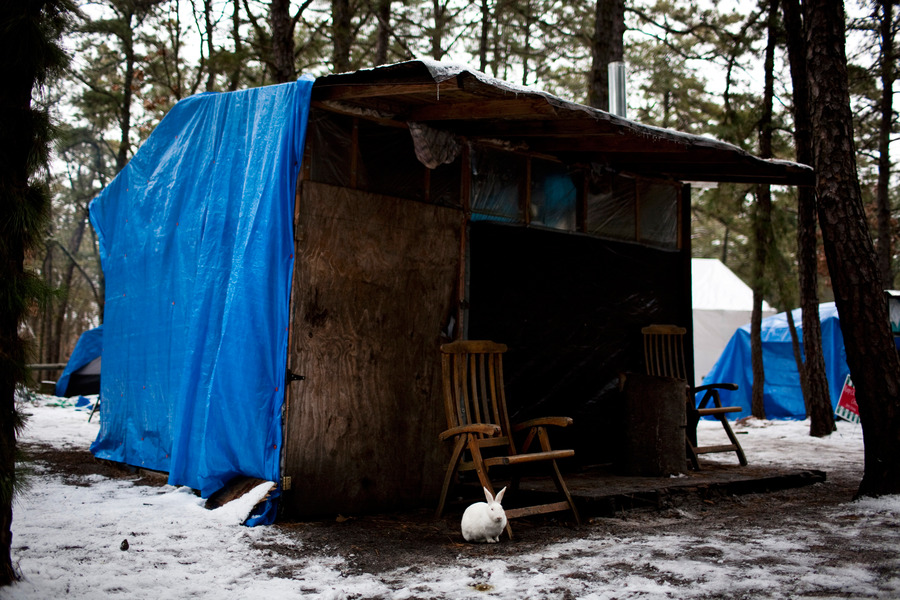 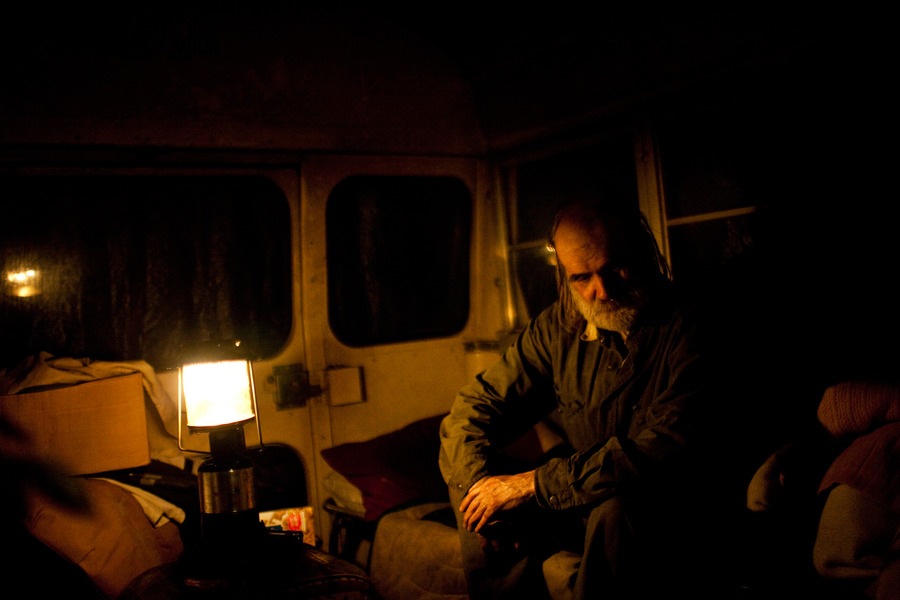 January 6th, 2012. Lakewood, New Jersey. Sam Dill in the school bus he shared with his friend Mary Beth. Sam lived in these woods before there was a camp here, and is one of the original residents of tent city. When the police took away the bus he lived in, he moved into a tent recently vacated when Nina, another long time resident, died in her sleep. (Natalie Keyssar) 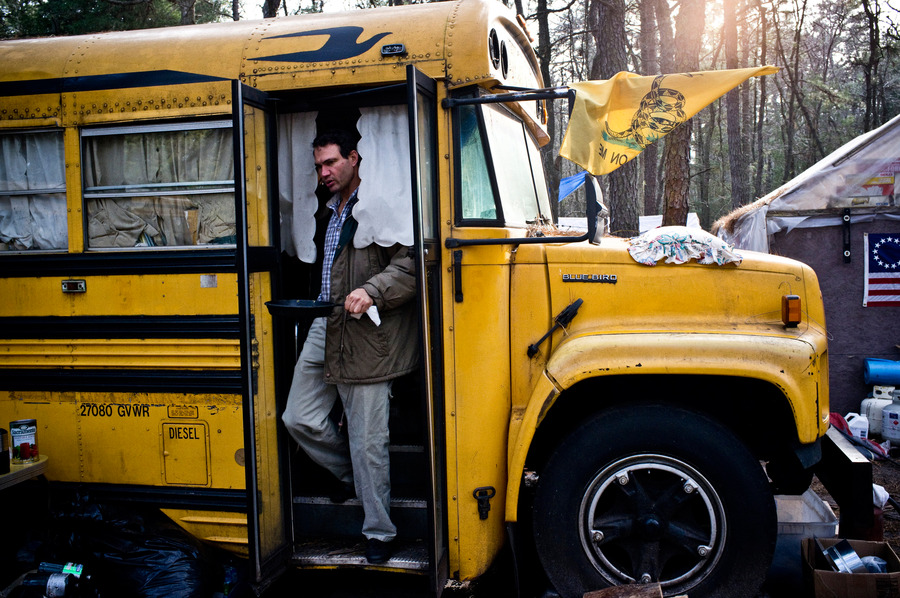 January 6th, 2012. Lakewood, New Jersey. Minister Brigham emerges from his home, a converted school bus parked in the center of the camp, which was later confiscated by Lakewood Police siting lack of vehicle permits for the public property. (Natalie Keyssar) 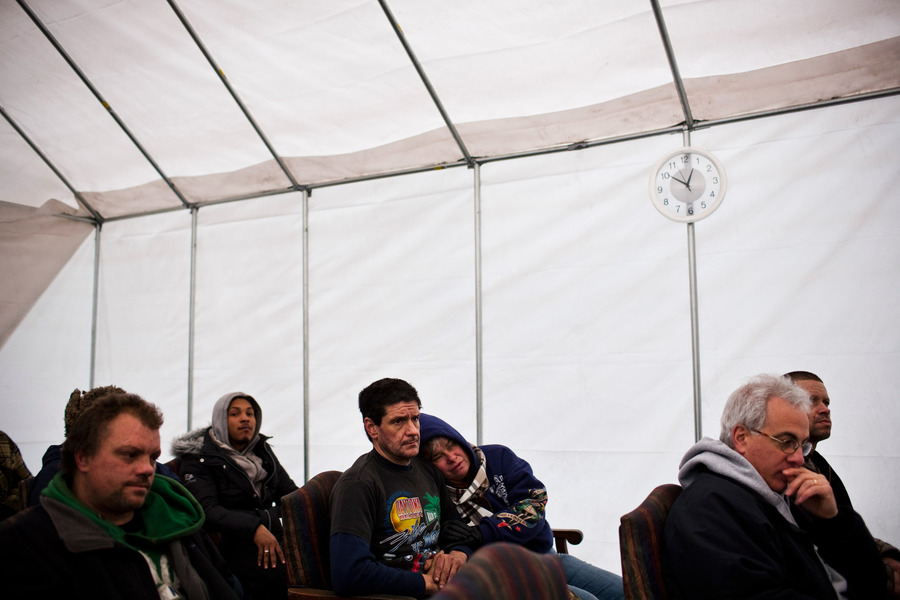 January 22, 2012. Lakewood, NJ. Roseanne and Tim, center, listen to Minister Steve's sermon during Sunday services in the camp. Roseanne has battled substance abuse problems, but was in counseling with hopes of turning her life around. The Sunday Sermons typically mingle traditional biblical topics with calls for increases rights and support for the homeless. (Natalie Keyssar) 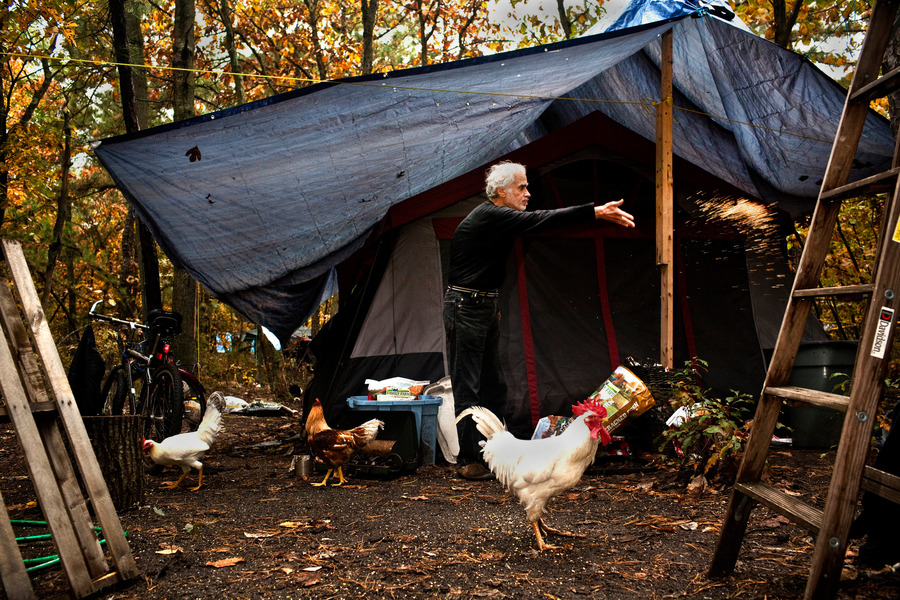 October 19th, 2012. Lakewood, NJ. Michael Berenzweig feeds the chickens in the section of camp he shares with his wife Marilyn. The couple moved to tent city after Marilyn lost her job as a textile designer in New York to the recession. "I've always been the breadwinner," she says to explain her husbands unemployment. The couple keep a strict vegan diet and care for many of the camp's animals. Mike talks of moving down south to a home that a friend said they might be able to live in for free, but Marilyn, having grown accustomed to life in the woods, says she wouldn't mind staying for a while. (Natalie Keyssar) 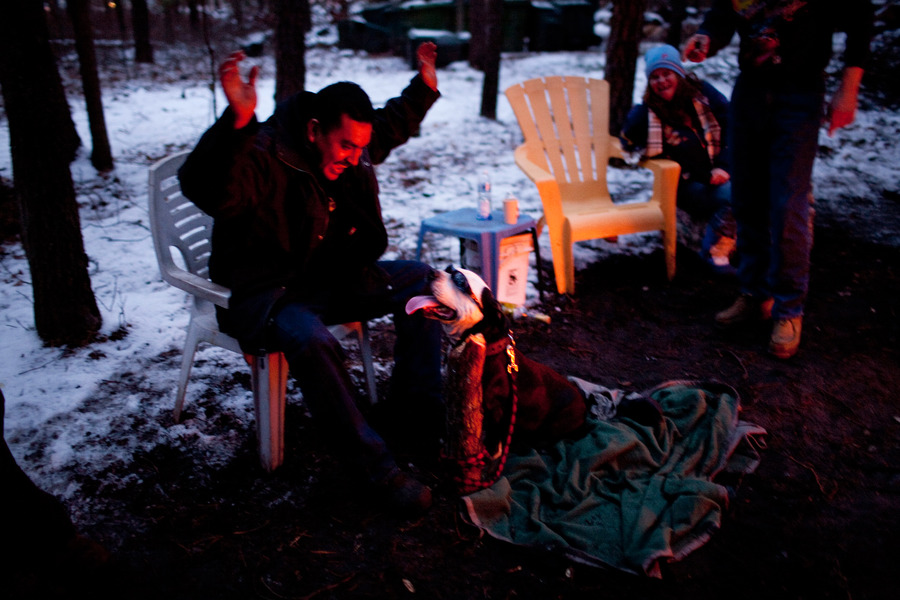 January 22, 2012. Lakewood, NJ. Tormenta, a pit bull who lives in the camp, plays with residents around the camp fire. (Natalie Keyssar) 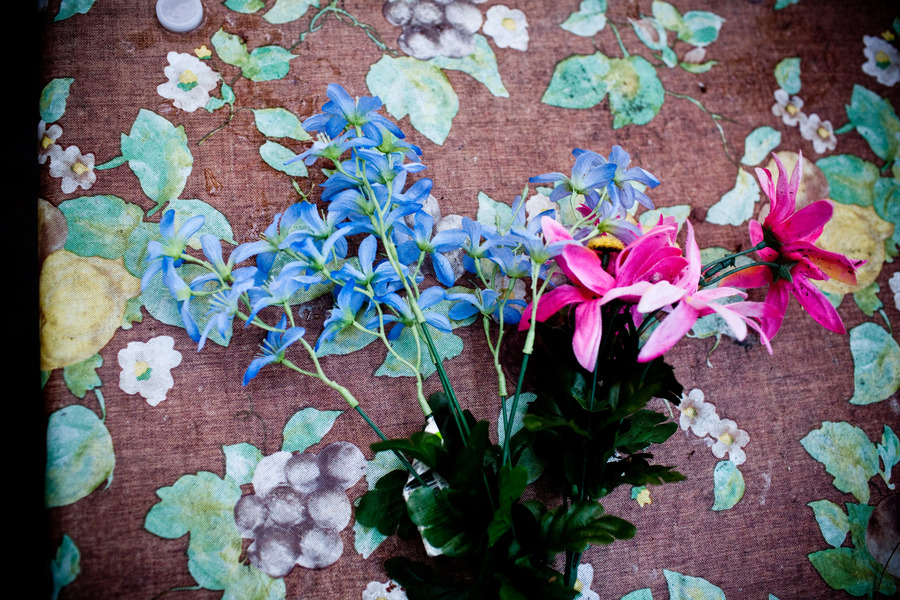 August 31, 2012. Fake flowers used to liven up the camp are placed on a table outside a resident's tent. (Natalie Keyssar) 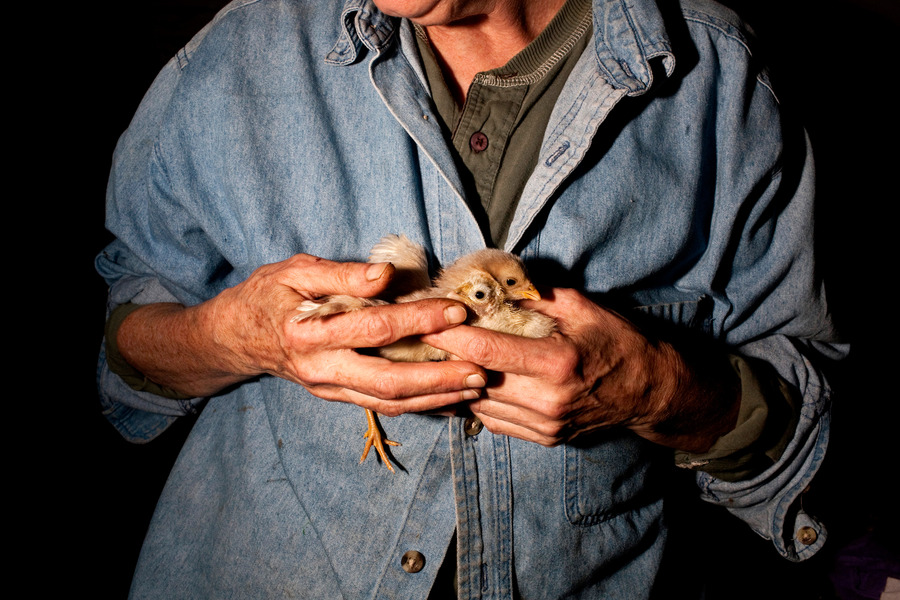 October 19th, 2012. Lakewood, NJ. Marilyn Berenzweig, a resident of Tent City since she lost her job as a textile designer in NYC to the recession, holds two chicks that she is currently keeping in a cage in her tent until they are old enough to fend for themselves in the cold weather. She and her husband Michael care for many of the camp's chickens. The rooster population has become somewhat controversial. Many residents complain bitterly the contstant crowing in the camp, from sun up to sun down, when the birds take to the trees for safety. Some say however, that the natural alarm clocks help discourage those with mental health or substance abuse problems from sleeping the day away. (Natalie Keyssar) 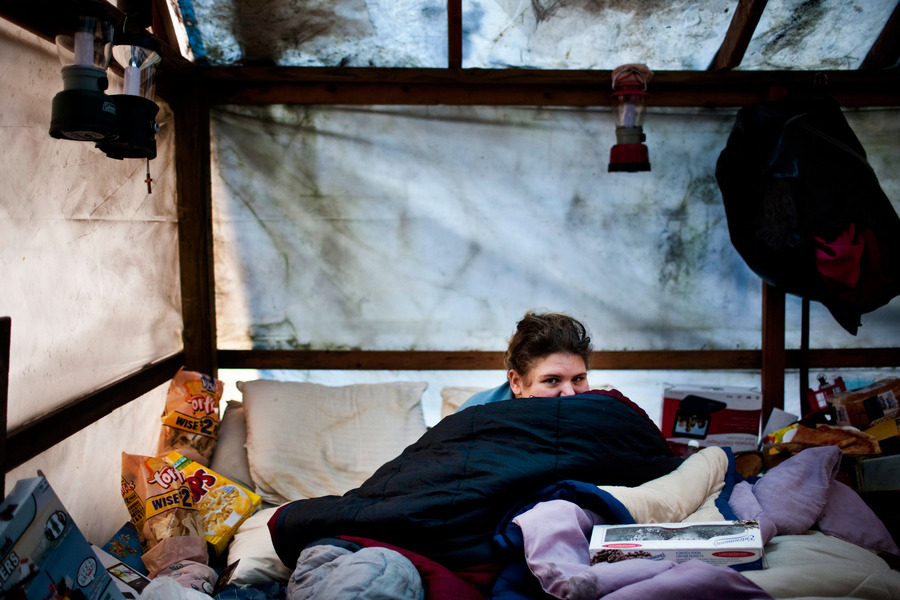 January 22, 2012. Lakewood, NJ. Cheryl Wilkins stays warm under the blankets in her tent a cold winter's day. The 29 year old was 3 months pregnant at the time. She carried the baby to term and gave it up for adoption, according to other residents. Finding money and transportation to go to prenatal doctor appointments was a struggle. Before she came to Tent City, she had lived on the street with her boyfriend, bouncing in and out of shelters. She found the shelters difficult. Mens and women's dorms separated couples. Shelters required an early departure and one was forced to bring all their belongings with them, which made transportation difficult, let alone a job interview. She was afraid of the sheltered populations, which she said contained drug addicts and child molesters, all sleeping in the same room. In Tent City, she had found relative stability and safety. (Natalie Keyssar) 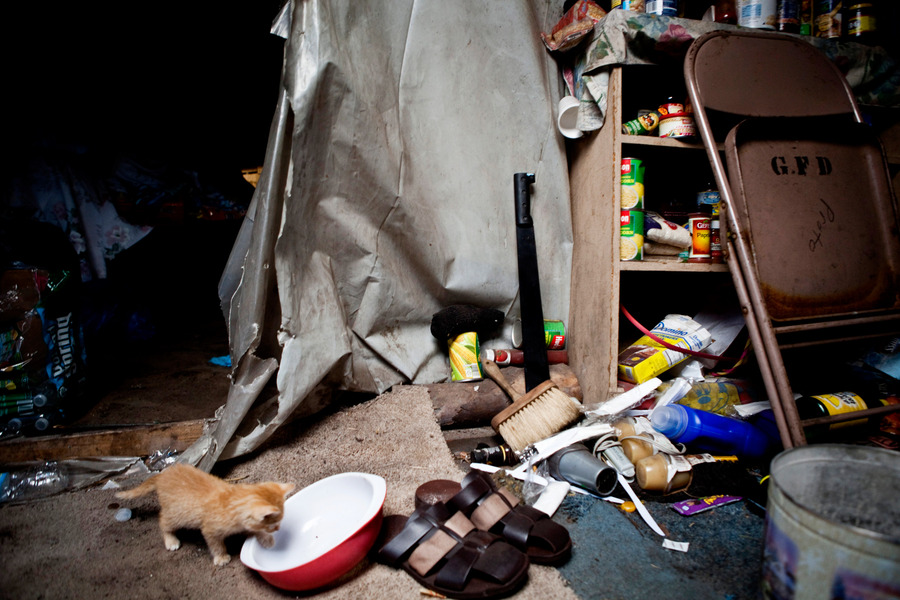 October 19th, 2012. Lakewood NJ. A kitten plays in the corner of a tent, near where the owner keeps a machete for protection among stored canned goods and other collected items. Many residents cite the ability to keep pets as an attraction to the camp as opposed to shelters. The camp's many cats, dogs and roosters all appear well fed and healthy. 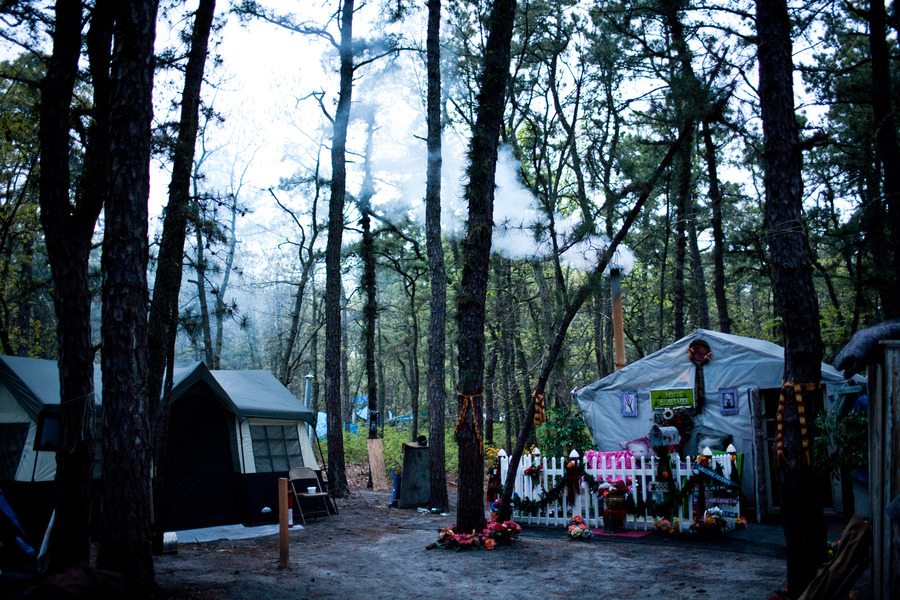 May 03, 2012. Lakewood, NJ. Smoke comes out of the chimney from Cynthia and Elwood's wood burning stove. (Natalie Keyssar) 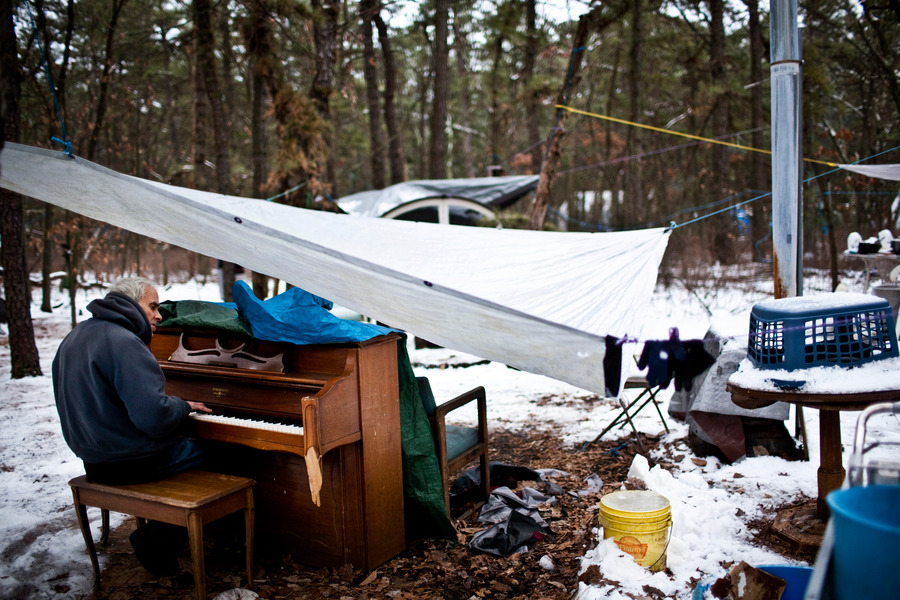 January 22, 2012. Lakewood, NJ. Michael Berenzweig plays a song by The Doors on his piano, which he keeps under a tarp in the area of the camp he shares with his wife, Marilyn Berenzweig. The couple moved to the camp from New York City after Marilyn lost her job as a textile designer to post-recession downsizing. They keep a strict vegan diet and take care of the camp's many chickens and roosters. (Natalie Keyssar) 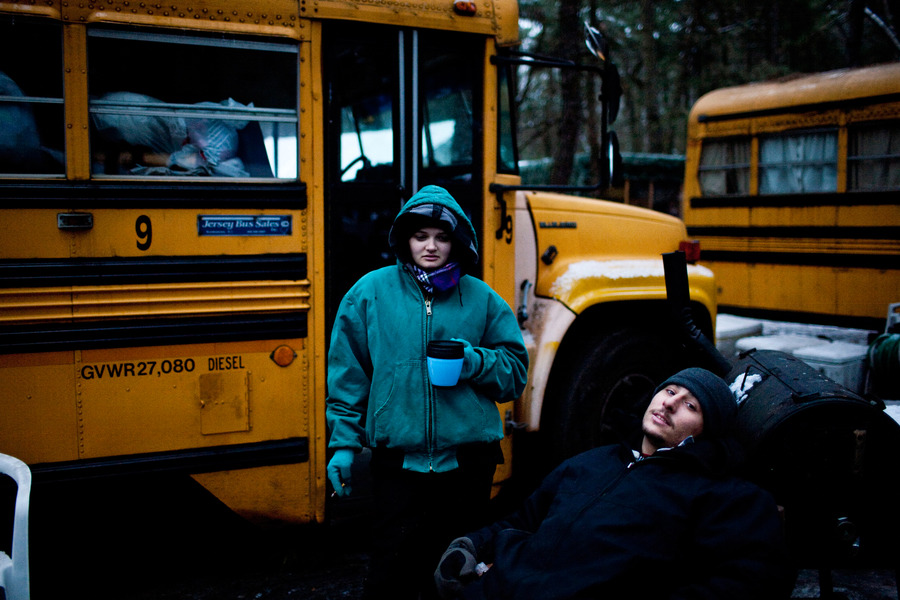 January 22, 2012. Lakewood, NJ. A young couple bundles up against the cold late on a January afternoon in tent city. They declined to give their names because the girl was a minor and she worried that her parents would come after her to bring her home if they knew she was there. The pair have since moved on. (Natalie Keyssar) 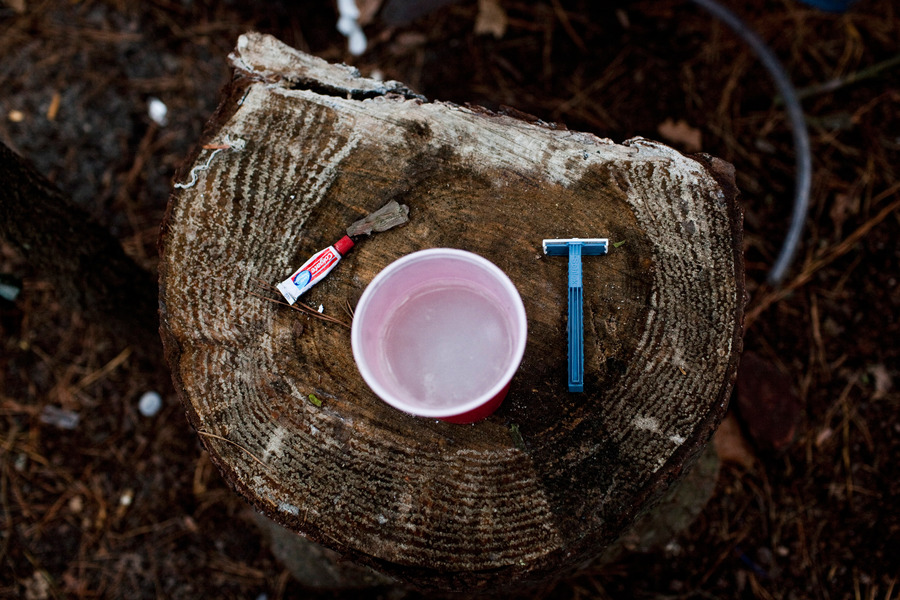 May 3, 2012. Lakewood, NJ. Angelo Villanueva's toothpaste, razor and a cup of water sit on a tree stump near his compound. (Natalie Keyssar) 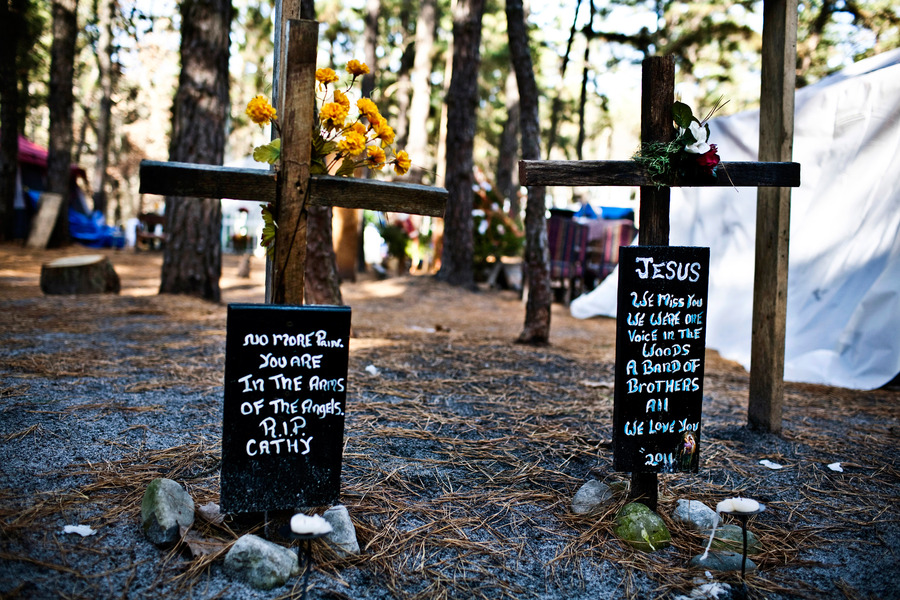 Friday, December 9th, 2011. Memorials for two residents who passed away in the last couple of months near the center of camp. Cathy was hit by a car and Jesus died of an overdose according to other residents. 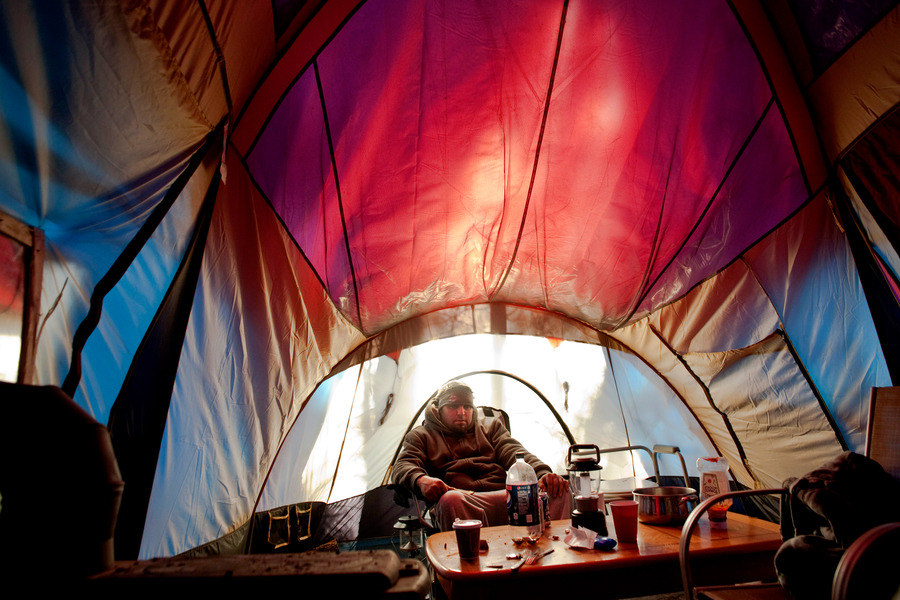 January 6, 2012. Lakewood, NJ. Joe, a veteran of the Iraq and Afghanistan wars, sits in his tent on a chilly winter day, after spending the morning at court awaiting Judge Foster's decision about evicting the camp. There was a sense of relief throughout the camp as word of the judge's ruling to let the camp residents stay pending mediation spread through the community. Joe suffers from PTSD. (Natalie Keyssar) 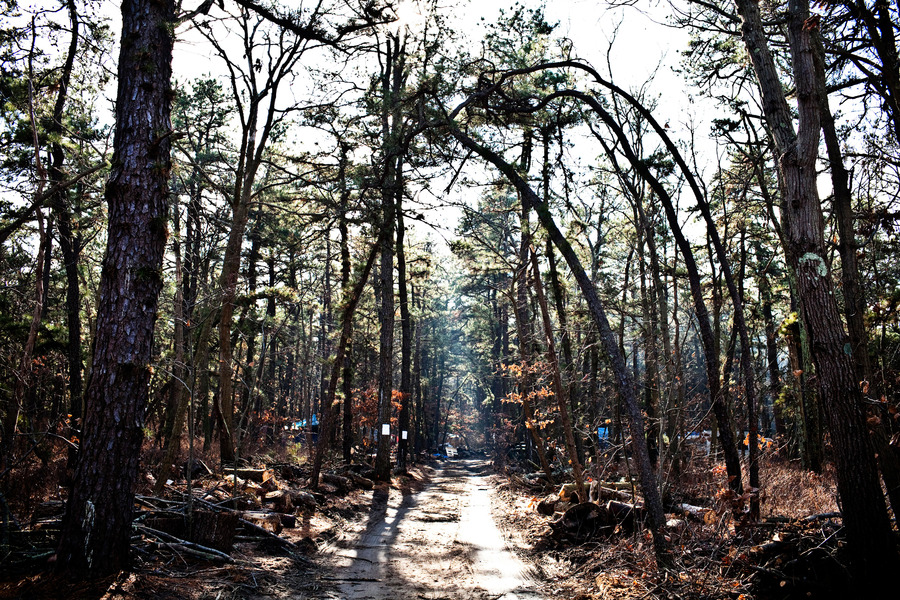 Friday, December 9th, 2011. A dirt road leads to the tent city from Cedar Bridge Ave in Lakewood, a nondescript suburban artery that divides the publicly owned forest from a middle income apartment complex and a suburban neighborhood beyond it. (Natalie Keyssar) 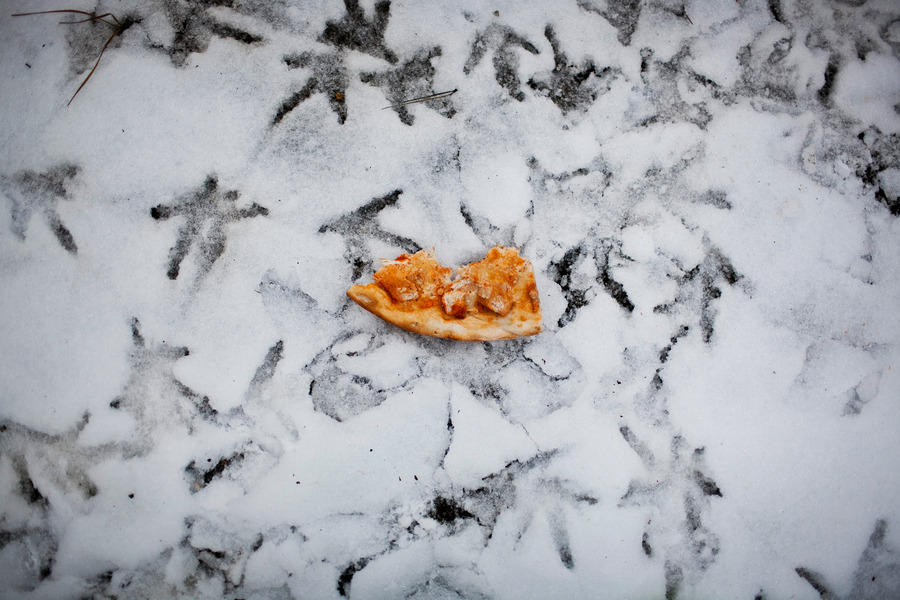 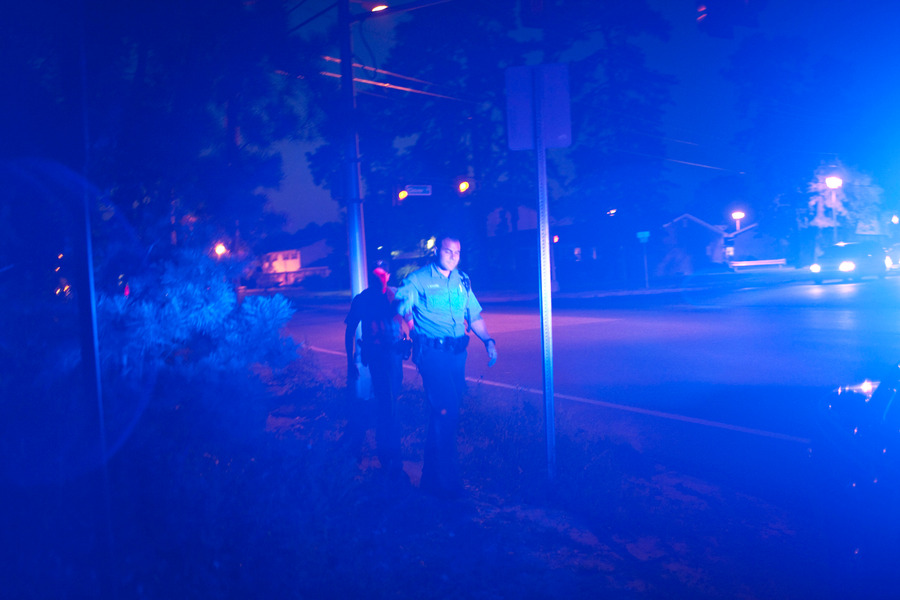 August 31 2012, Lakewood NJ. Lakewood police respond to a disturbance call at the camp. The Lakewood Police department reported almost 200 visits to the camp in the preceding year. Minister Steve calls this a campaign of harassment, while some city officials consider the regular complaints of fights, drunkenness, overdoses and theft in the camp a reason it must be closed down. (Natalie Keyssar) 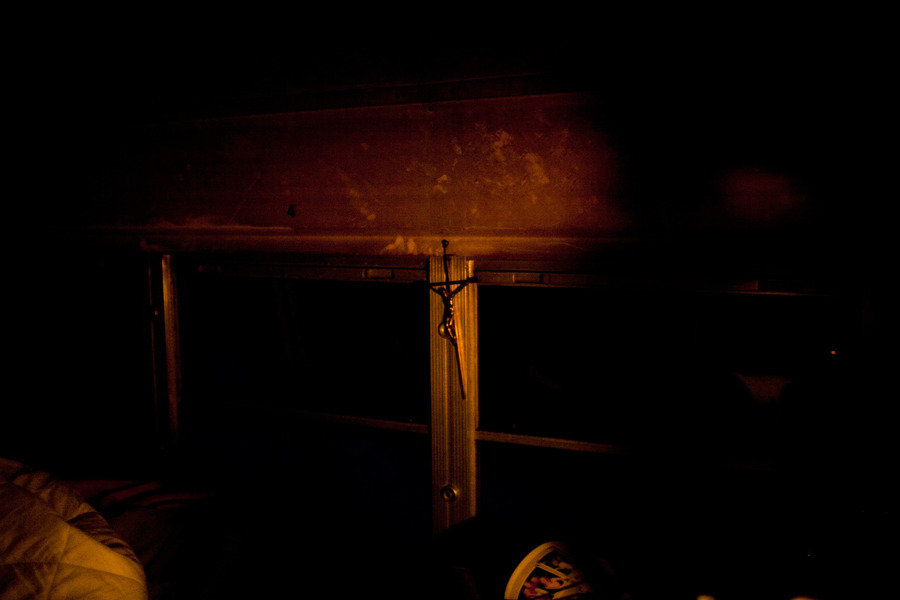 January 6th, 2012. Lakewood, New Jersey. A cross hangs over Mary Beth's bed in a non working school bus which she lived in with Sam Dill, a friend of hers and one of the first people to occupy Tent City, until the buses were removed by police citing lack of vehicle permits, in the Spring of 2012. Mary Beth asked not to be photographed, fearing that her children would see her, ashamed of her living conditions. She said she had ended up in Tent City after losing her job at Wal Mart some years before, and being unable to pay rent. (Natalie Keyssar) 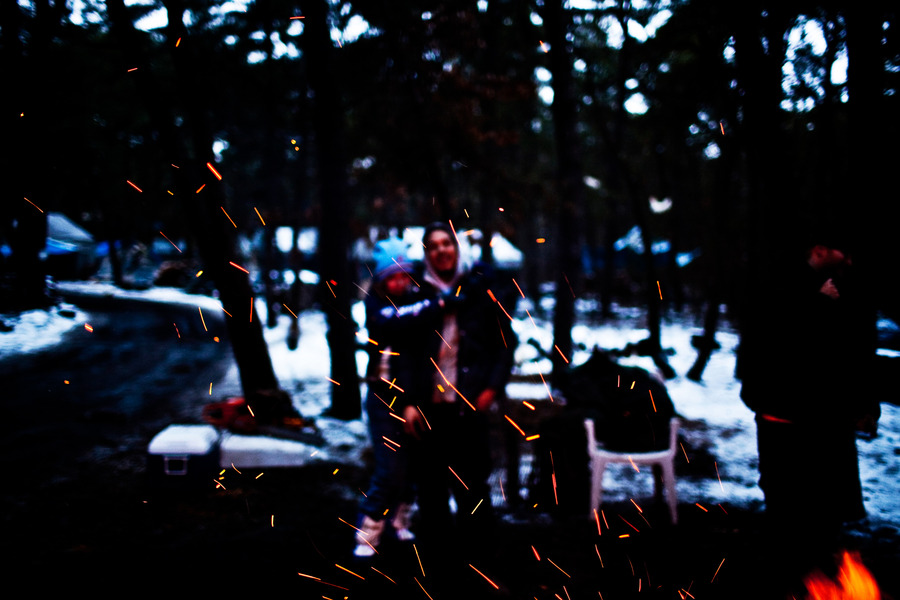 January 22, 2012. Lakewood, NJ. Residents relax by the fire after a long day of chopping wood for heat. (Natalie Keyssar) 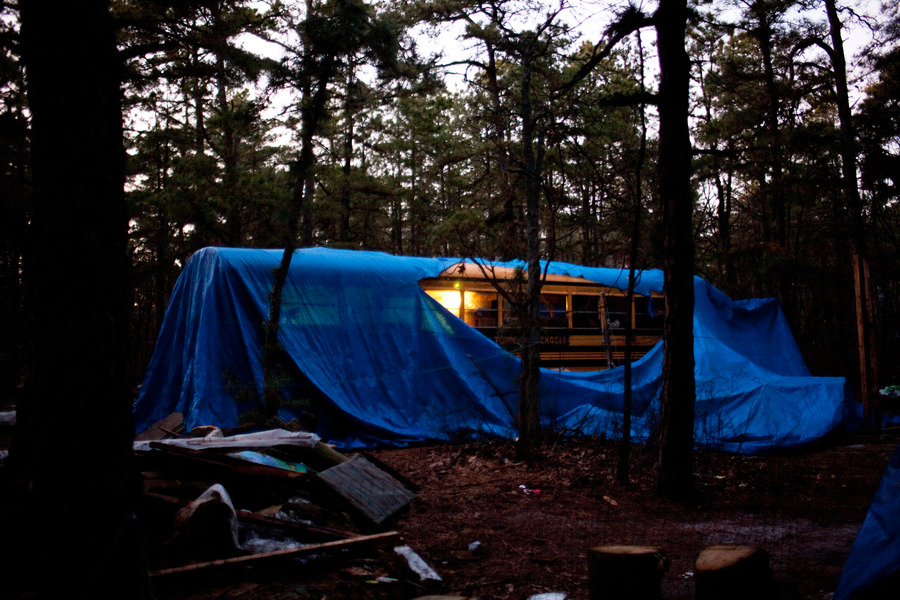 January 6th, 2012. Lakewood, New Jersey. Mary Beth and Sam's school bus, donated after it became too old to use for transporting children. The pair lived in the bus until the city confiscated the camp's buses, due to lack of vehicle permits. Minister Steve maintains the confiscation was part of systematic harassment on the part of the city. (Natalie Keyssar)